Kurgan 1 in the Beysuzhek-9 kurgan group

The Korenovsky district of the Krasnodar Oblast between the towns of Korenovsk and Timashevsk on the high floodplain of the Levyi Beysuzhek River among the agricultural fields, divided into sections by forest belts.

Geomorphologically, the area belongs to the Kuban-Azov lowland. The climate of the region is moderately continental. Amount of precipitation is 400-600 mm per year; vegetation is motley grass-fescue-feather steppe, practically absent in modern landscapes due to total plowing. Soil-forming rocks are loess-like loams and clays. Soils are classified as micelium-migrational Chernozems according to the Russian system of soil classification (Haplic Chernozems Loamic – according to WRB) or segregational Chernozems (Calcic Chernozems Loamic). 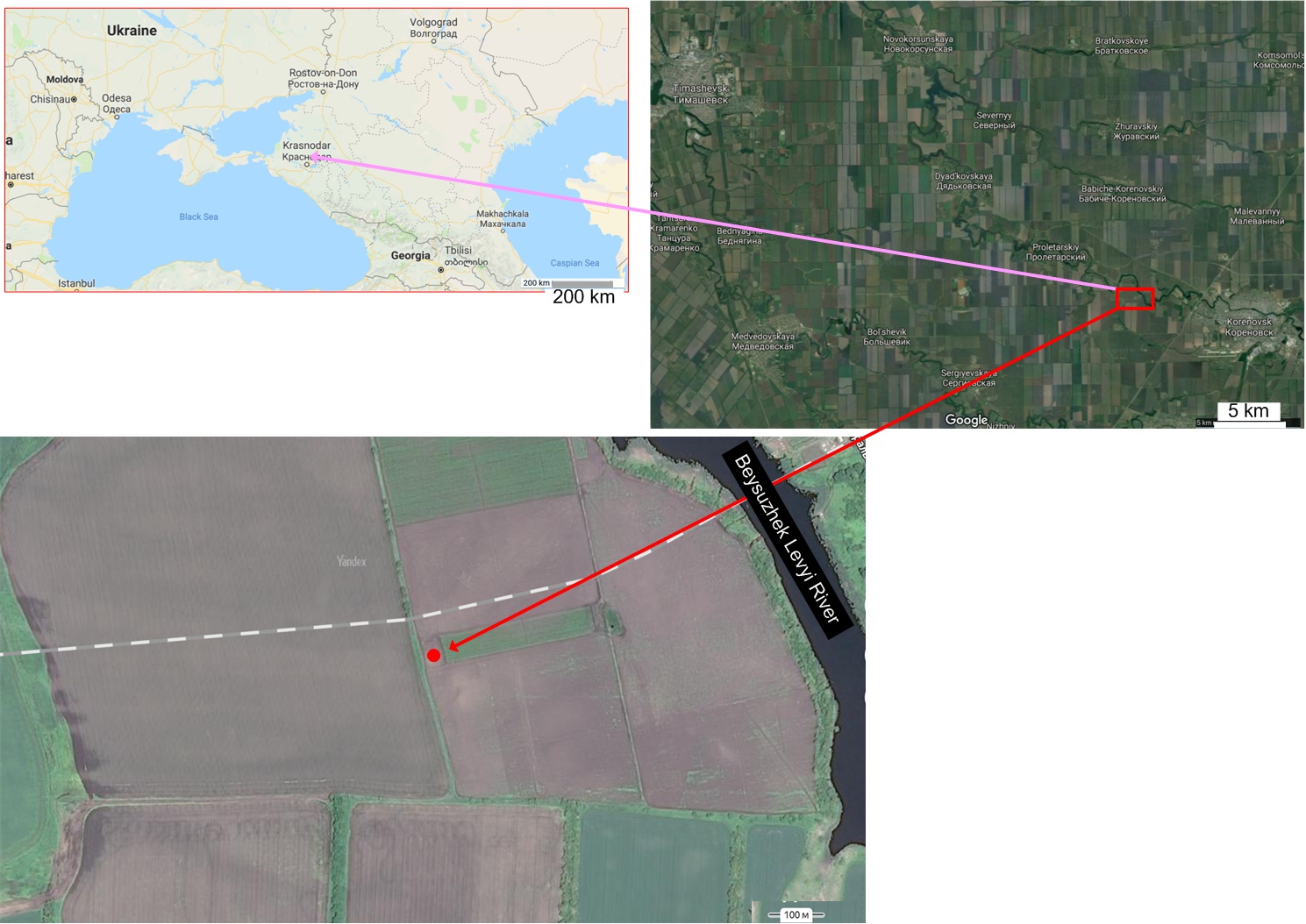 The height of the kurgan was more than 4 m. In the kurgan, three different mounds were singled out, which were well seen in the field. According to archaeological data, the first and second mounds in the kurgan was built by representatives of the Novotitor culture at the end of Early-at the beginning of Middle Bronze Age, the 27th (26th) – the 22nd(21st) centuries BC. And the third mound was built by representatives of the Catacomb culture, the 21st – the 16th (15th) centuries BC.

Kurgan 1 in the Beysuzhek-9 kurgan group. Three different mounds are well seen in the kurgan.

The soil pits were made under all three identified mounds in the kurgan. Under the first most ancient mound located in the centre of the kurgan, a pit 1 was laid, under the other two mounds on the periphery of the kurgan - pits 2 and 3. Morphogenetic analysis of all the soils was conducted, and palynological analysis was made in samples from the upper 0-5 cm layer of these soils. 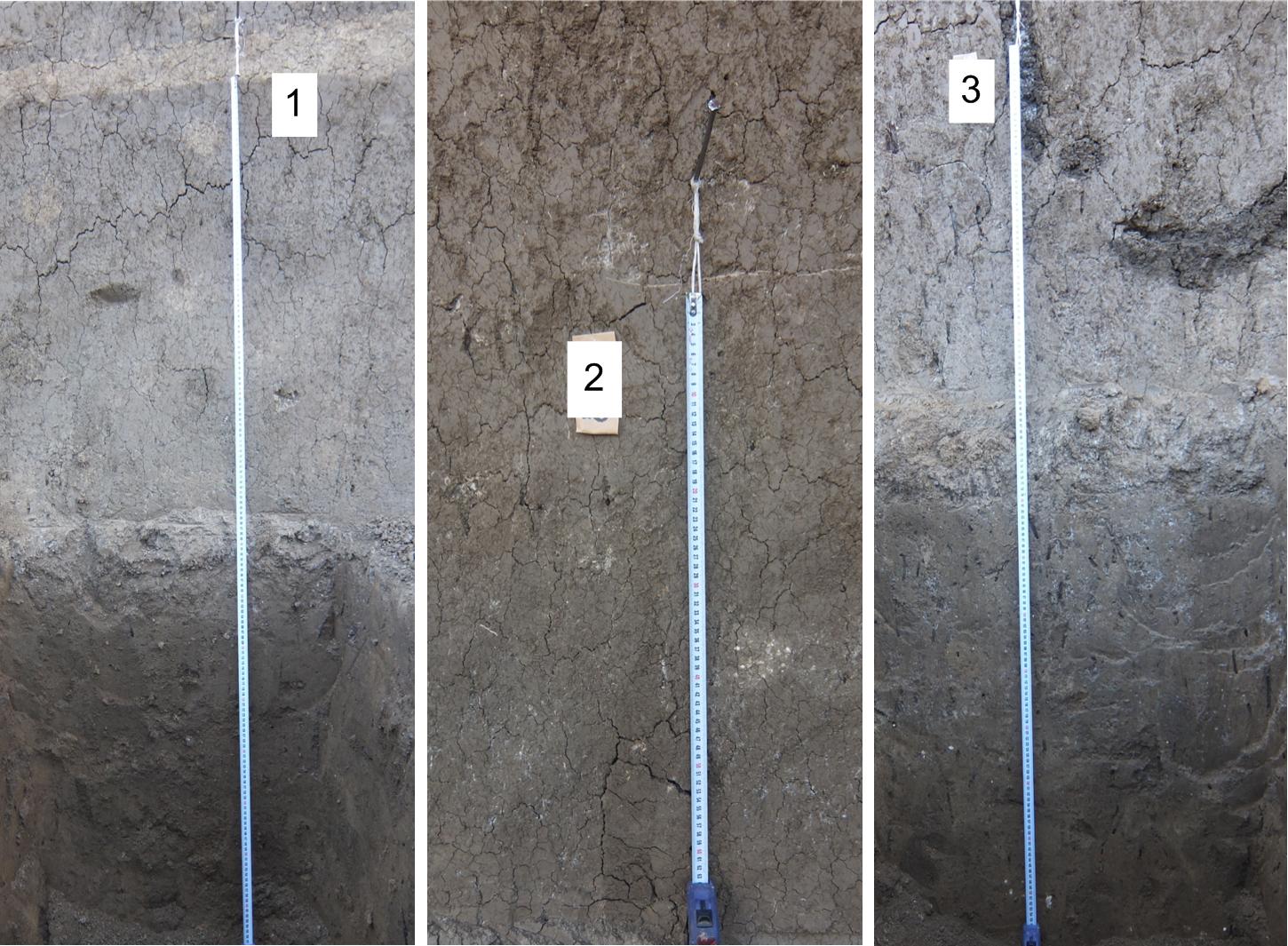 At the present time in the steppe zone of Russia the surface soils of flat areas have been greatly altered by human activity - plowing, irrigation, residential activity and other anthropogenic impacts. Therefore, these soils do not reflect modern climatic conditions; it is useless to compare the buried soils with them in order to reconstruct the paleo-environment. The purpose of this work was to reconstruct the paleoenvironmental conditions for the time interval of the construction of a large kurgan in the Krasnodar Oblast, Russia. We had no opportunity to compare the buried soils with the surface ones, since the modern soils around the kurgan were subjected to prolonged irrigation. Their carbonate and humic profiles were strongly transformed due to irrigation. In order to accomplish the aim of our study, we studied the properties of paleosols buried under uneven-aged mounds in this kurgan, built a chrono-sequence from them in which the direction of changing of soil properties was revealed.

Kurgan 1 in the Beysuzhek-9 kurgan group began to be built in a favorable bioclimatic period with the predominance of Haplic Chernozems formed under diverse vegetation cover. On the nearby territory meadow steppes dominated, on the watersheds hornbeam-elm-crochet-oak groves of complex composition are noted, the swamp bogs were widely developed. Earlier for the neighboring Rostov, Volgograd, Orenburg oblasts, the time interval since the 27th till the 23rd centuries BC was characterized as favorable for bio-productivity with humid climatic conditions, and a softening of aridity and continentality of climate.

At the same time, at the turn of the third and second millennium BC many researchers of the Russian steppe zone note the ecological crisis associated with a sharp increase in climate aridization. The properties of the soil buried under the third mound of the studied kurgan 1 confirmed this data. The soil can be characterized as Calcic Chernozems with low content of humus and high carbonates content. In the palynological spectrum, plants of Chenopodiaceae family appear, as well as many species that indicate the steppe vegetation and salinity of soils in the landscape.