The study site is located 2.5 km north of the village of Muradymovo, in the Aurgazinskiy District of the Bashkortostan Republic of Russia.

The climate is continental, moderately cold. The mean annual air temperature is +2.5°С, the mean temperatures of January and July being –15°С and +19.5°С, respectively. The frost-free period lasts 140 days, being the longest within the Bashkortostan Republic. The mean annual precipitation is about 500 mm, with more than 300 mm falling during the growing season. The hydrothermal coefficient is about 1. The typical modern vegetation is represented by steppe communities. The typical soils are Greyzemic Chernozems (WRB, 2014) that are naturally gypsum-free to a depth of 2 metres. 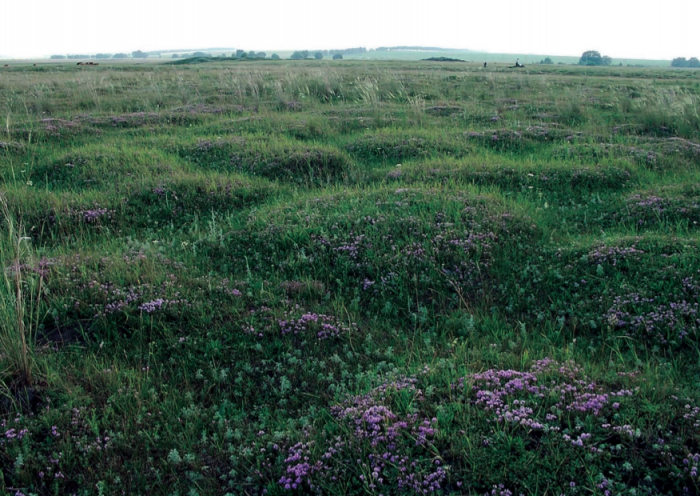 The site and its area have a peculiar “hillocky” microrelief that does not occur anywhere else in the Bashkortostan Republic. The local residents assumed that the hillocks were old tree stumps overgrown with grass, but we suggested that they were traces of ancient human activity.

The settlement was built by ancient people of the “Srubno-Alakul” archaeological culture of the Late Bronze Age (1750–1350 BC cal), who lived here for no longer than 200–300 years. Later the settlement remained abandoned. At present, the site is covered with sparse steppe vegetation, partially used as a pasture and bordered by a gully from the west and north. There are six depressions (house pits) with areas from 260 to 300 m2 and depths from 0.25 to 0.4 m recorded within the site.

No buried soil was found on the territory of the settlement. The residual piles of gypsum rock account for the appearance of the aforementioned hillocky microrelief of the study site. A similar microrelief typically occurs in deserts, but would not be expected to be found in this humid region of Urals. In addition, the ancient settlement site Muradymovo is located on a hill, and not within a depression. However, the soils formed within the cultural layer of the settlement are characterized by the presence of up to 27% of gypsum in the upper horizons. On the settlement and nearby around it, there is a hummocky microrelief characteristic of gypsum deserts. In our opinion, this is due to human activity, since the people who lived on this settlement in the late bronze age built their houses from gypsum rocks (Permian rocks of the Kungur tier containing crystalline gypsum). 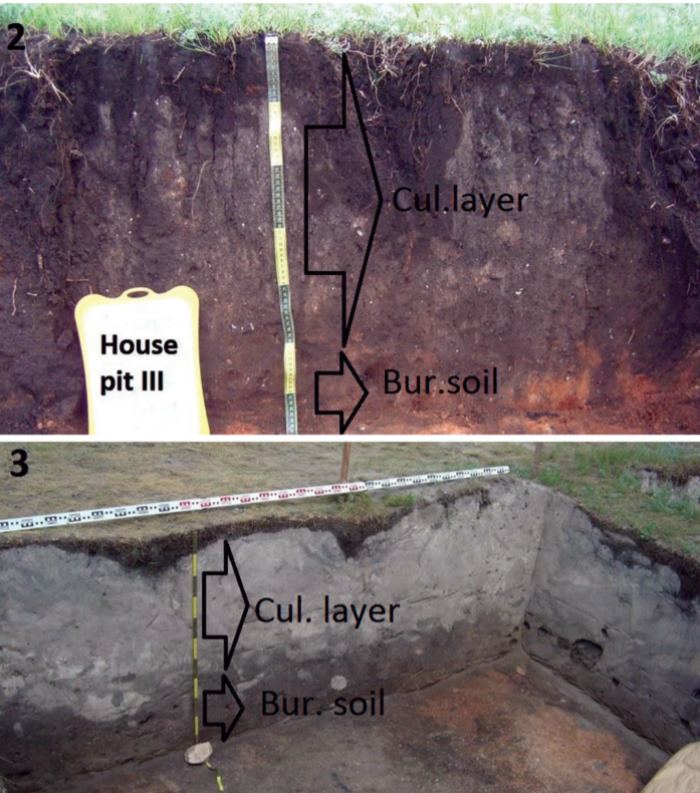 The typical soils are Greyzemic Chernozems that are naturally gypsum-free to a depth at a depth of more than 3 meters.

On the basis of the data obtained it can be confidently concluded that the gypsum-bearing strata in the upper parts of the excavation pits have anthropogenic origin. In other words, people built their houses of mud-bricks made of a mixture of gypsum and organic matter, occasionally with the addition of small amounts of calcareous rocks. This hypothesis is supported by the differences in gypsum content in excavation pits III and IV. The former is gypsumfree and represents a single-stage farm building, while the latter contains almost pure gypsum within the upper layers and represents a consecutive series of houses built one after another at the same place. The accumulation of large amounts of gypsum rocks within the ancient settlement site resulted in contamination of the environment with gypsum. The Muradymovo settlement site is located in a humid climatic zone with frequent rainfall, especially in summer. Gypsum solubility in water is relatively high, which causes a gradual deterioration of houses constructed of gypsum and a subsequent contamination of the surrounding areas with gypsum. With a high degree of confidence it can be stated that the abandonment of this area was caused by a humaninduced ecological disaster, i.e. severe salinization of the groundwater, which made it impossible to stay in this area. During the period of abandonment of this site, the natural processes homogenized the cultural layers of the construction pits. The leaching of salts during the wet seasons was accompanied by the process of upward migration and precipitation of salts during occasional summer droughts as well as severe frosts. Still, the residual amount of gypsum is still large after more than 3000 years following the contamination. Therefore, it can be assumed that the initial man-made soil contamination by gypsum was extremely strong. The properties of the modern soils are being directly affected by the Late Bronze Age human activities, with 3.5 thousand years being an insufficient timescale to restore the soils to be naturally gypsum-free.

Recently, many more settlements belonging to the “SrubnoAlakul” archaeological culture have been discovered along the Urshak River. We have observed similar cases of gypsum contamination in five sites of these settlements. Therefore, it can be concluded that the extremely negative influence of the Late Bronze Age human activity on modern soils and landscapes has occurred in several locations within this region.