Fortification rampart of the Mukhino settlement

The study area is located in the central part of the forest-steppe zone of European Russia, in the vicinity of Zadonsk, Lipetsk region. 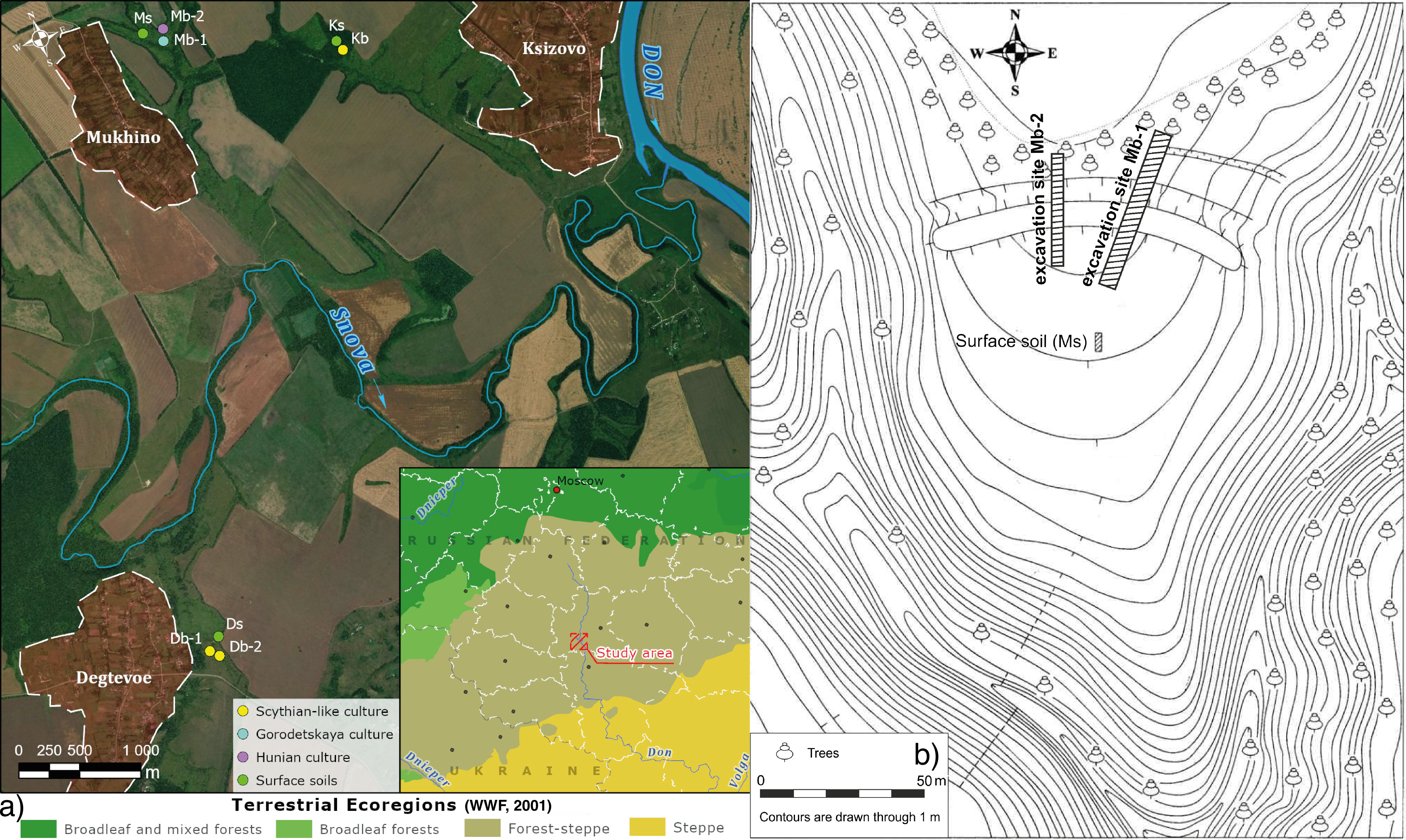 It is a highly dissected hilly terrain at an elevation on 170-180 m a.s.l. Quaternary sediments are represented by glacial deposits - moraine with a predominance of loam sediments with gravel, pebbles and clay (Geological map of quaternary deposits of the Lipetsk region, 1998). The upper sediments are presented by a thick layer of loess (up to 26 m), either calcareous or non-calcareous, sometimes with gypsum (Sycheva, et. al, 2017, Tregub, 2014).

The main rivers are the Don River and its tributary the Snova river. The study area is characterized by the temperate continental climate, with mean temperature 23,5°C in July and -9,5°C in January, and mean annual precipitation of 548 mm (https://en.tutiempo.net/). Natural vegetation is variable because the territory is located in the forest-steppe ecotone and consist of mixed-grass steppe and linden and oak forest patches (Atlas of the Lipetsk region, 1994.). The soil cover is dominated by Luvic Phaeozems (IUSS Working Group WRB, 2015) that cover uplands and gentle slopes.

The vegetation is represented mostly by herbaceous-grassy communities with some patches of deciduous forest. Soils were formed on calcareous loess.

-The settlement represented hillforts of the Early Iron Age surrounded by defensive ramparts - an earth walls constructed from the soil excavated nearby. The Mukhino settlement has two ramparts, the first rampart was built ~2500 years BP (Mb-1) at the time of Gorodetskaya culture, the second one was constructed by Huns ~1500 years BP (Mb-2).

The buried soils were studied under two ramparts with the preserved height of 150 cm. The ramparts were constructed from heterogeneous materials, including carbonates from the soils excavated nearby. The soil buried 2500 yrs BP (Mb-1) (Chernic Greyzemic Luvic Phaeozem (Cutanic, Loamic)) consists of the following horizons: AhEb-AhBb-Btb-Bkb-BCkb (Table 1, fig. 3, 10). All horizons contain small spots showing weak effervescence due to the carbonates penetrated from the rampart. The first AhEb horizon contains krotovinas ~10 cm in size. Greyzemic features are manifested by uncoated silt grains in the lower part of dark grey (10 YR 2/1) mollic horizon. In the argic horizons, the angular blocky and prismatic structural units and trans-horizon cracks are covered by thick clay-humus cutans. Carbonates appear in the Bkb horizon as soft powdery lime, rhizoconcretions and coatings overlying clay cutans from 1 metre. The BCkb horizon is characterized by strong effervescence, presence of soft powdery lime and hard nodules.

The soil buried under the earth wall constructed 1500 years BP (Mb-2) meets the criteria of Gleyic Chernic Luvic Phaeozem (Cutanic, Loamic) and includes the following horizons: Ahb-AhBb-Btb-Btkb-BCtklb. The dark grey (10 YR 2/1) mollic horizon have neither carbonates, no Greyzemic features (Table 1, fig. 3, 10). Krotovinas with dark humus filling are well expressed and abundant in AhBb, Btb and Btkb horizons. The amount of krotovinas is higher than in the other soils. The Luvic features are indicated by thick clay cutans in the argic horizon. Carbonates are abundant from 85 cm and are presented by hard and soft nodules and carbonate coatings on top of clay cutans. Redoximorphic features in the BCtklb horizon manifested by diffuse reddish (5 YR 4/6) and greenish spots (G1 5/10Y) and Mn concretions. 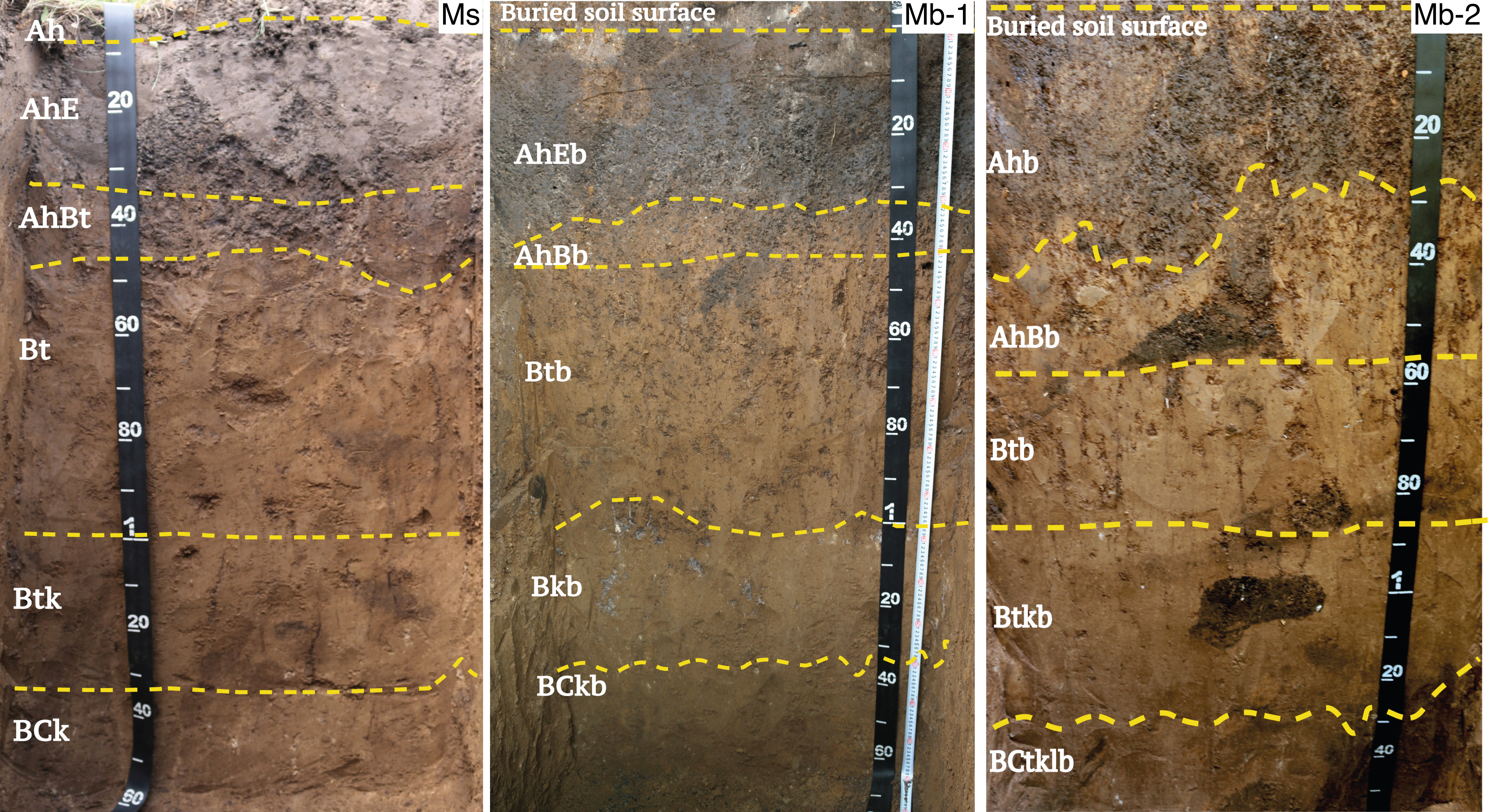 -The surface soil (Ms) is represented by the following horizons: Ah-AhE-AhBt-Bt-Btk-BCk and classified as Greyzemic Luvic Phaeozem (Cutanic, Loamic) (fig. 3, 10). The Ah horizon is characterized by dark grey colour 10 YR 4/1 and granular structure (Table 1). Uncoated silt and sand grains on the ped faces in the lower part of a humic horizon (AhE) indicate Greyzemic features (IUSS Working Group WRB, 2015). The Argic horizon is characterized by angular blocky/prismatic structure and well-expressed clay cutans on the ped surfaces. Carbonates appear at the depth of 100 cm in Btk horizon and presented by soft mottles and pseudomycelia. Carbonate content increases in BCk horizon indicated by strong effervescence, hard nodules and carbonate coatings above clay cutans.

Our investigations showed that climate in the forest-steppe zone was changing from more humid and arid phases during the Holocene, which was reflected in the soil profiles. The buried and the surface soils reveal signs of both forest and steppe stages of soil formation. Soils are presented by Luvic Phaeozems (Cutanic, Loamic), Luvic features are expressed in well-developed cutan complex in argic horizons and Greyzemic features manifested as uncoated silt grains. Soils were formed in similar calcareous loess sediments. Soils are located 2-3 meters apart and have the same topography and geochemical characteristics of the parent material. We may consider that the main factor of the transformation of soil profiles was climate variability.

Using both pedological and microbiomorphs methods, it is possible to identify a few stages of soil formation during Late Holocene in the central part of the forest-steppe zone of the Russian plain. Based on the similarity between the major properties of the buried 2500 yrs BP and the surface soils, we conclude that the paleosol had being developed under open forest, similar to the modern one. However, the aridization that occurred before 2500 years BP was manifested in the appearance of carbonate coatings above clay cutans and rise of gypsum and carbonates up the profile. This phase can be attributed to the Scythian-Sarmatian arid period.

Another peak of arid climatic conditions is noted for 1500 years BP with higher carbonate table, carbonate coatings above clay cutans, the disappearance of Greyzemic features and emergence of new krotovinas. During this period grassy meadows replaced forest vegetation, which confirms by phytolith spectrum in the buried soil.

Surface soils of the study area are polygenetic and combine features formed under steppe and forest environment and contain information about different stages of dry and wet periods, which is evidenced by multi-layered cutan complex, with alternating clay and carbonate coatings, the presence of Greyzemic features and krotovinas.

Paleopedological issues are crucial for understanding past climate cycles and for better prediction of the future climate. Moreover, it was shown in this article that soil paleo-archives are in good agreement with the other proxies like spore-pollen analysis. Further studies will help to link the instability of landscapes with the dynamics of migration of ancient peoples.