The study was conducted in the vicinity of Tsivilsk situated in the Middle Volga region (Chuvashia Republic, Russian Federation). The examined paleosol belongs to the Taushkasy kurgan cemetery occupying the interfluve area on the right bank of the Maly Tsivil river covered by broadleaf forest vegetation

The study area is located in the northern part of the Volga Upland, known as the Chuvash plateau, which is confined to the large protrusion of the Precambrian basement in the western part of the Volga-Ural arch. Within the study area the plateau represents an elevated upland terrain with heights predominant between 150–180 m a.s.l. The plateau has long denudation slopes, dissected by deep gullies, dry U-shaped valleys as well as active river valleys. The upper part of the sedimentary cover is composed of Upper Permian sedimentary rocks overlain by Quaternary deposits. The pre-Quaternary sedimentary rocks are mostly sands containing lenses of sandstones and conglomerates, clays and siltstones. Sands and sandstones are greenish-pinkish-gray, sometimes reddish-brown, polymictic and fine-grained. Mottled clays and siltstones usually occupy the upper section of the pre-Quaternary sedimentary layer and often contain interlayers of sandstones. In the study area, weathered sandstone slabs were found rather close to the surface, at depths ranging from 60 to 150 cm. At the study site, soil parent material mostly consists of derivatives of the Permian sedimentary rocks (sandy loams, loams with pebbles, clays and sands), however in the wider surroundings soils have developed in loessic deposits. The climate of the study area is temperate continental, characterized by a mean January temperature of −12.4 °C and a mean July temperature of +19.4 °C. The annual precipitation/evaporation ratio equals 1.2, which characterizes the climate of the study area as humid; however, the average annual precipitation (540 mm) is less compared to the areas located on the same latitudes more to the west. In the second half of the winter the soil is usually frozen to a depth of 100 cm, while the snow cover in recent years varies between 30–45 cm. The maximum precipitation is observed in July (60–70 mm).

The common soils of the study site according to the State Soil Map are gray forest soils (Luvisols, according to IUSS Working Group WRB); however, the soil pattern of the study area is very complex and includes contrasting soils like Retisols and Phaeozems. Variation in parent material seems to be the major factor controlling soil formation and the occurrence of different soil types.

The Taushkasy kurgan cemetery is dated by archeologists to the 3rd- or beginning of the 2nd millennium BC and constructed by cattle-breeding tribes of the Abashevo culture (2500–1900 yrs BC). It counts more than 50 kurgans, arranged in three separate groups. Within the groups, the kurgans, 9–10 meters in diameter, are located densely together have heights ranging from 1 to 5 meters. The mounds have two types of shapes, being either circular or elongated. 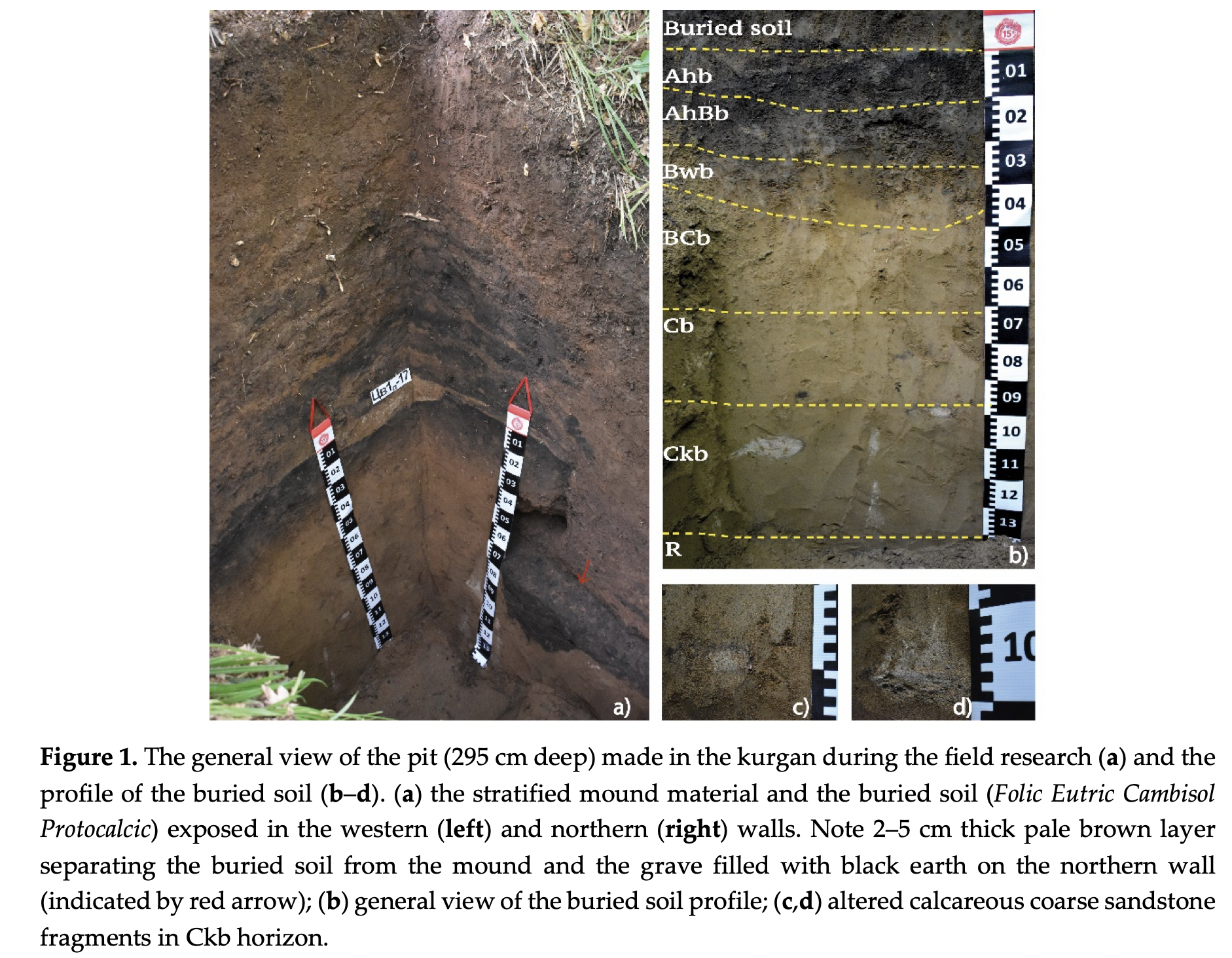 In the light of the radiocarbon dating of the organic (humic) substances which were separated from the grave fill material the paleosol was buried not earlier than 4425+/−50 yrs. BP , SPb 2455, or the beginning (the first half) of the Subboreal period, which confirms the archeological dating of the kurgans.

The buried soil was identified as Folic Eutric Cambisol Protocalcic. The following sequence of the horizons was distinguished: Ahb-AhBb-Bwb-BCb-Сb-Сkb-R (Figure 1b). The whole soil profile is weakly structured. The upper Ahb horizon has a very dark color—black to very dark brown, 7.5 YR 2.5/1-2, which is darker than the humus horizon of the surface soil, although the thicknesses of these horizons are almost equal. The transitional horizon AhBb displays a sandy clay loam texture, the presence of humus mottles and weak horizontal lamination, derived from the original layering observed in the sedimentary hard rock. The underlying Bwb horizon has a similar sandy clay loam texture and also shows weak signs of horizontal structuring. This horizon contains very fine fragments of lithogenic material (calcareous and non-calcareous) and shows traces of past mesofauna activity. Below the Bwb, the soil stratum consists of unstructured sandy loam. The BCb horizon has a yellowish-brown color, grading into the Cb horizon which contains fine soft Mn nodules, further underlain by a slightly reduced loamy sand Ckb horizon with numerous altered calcareous coarse sandstone fragments (Figure 1b–d) and finely divided lithogenic material which causes a slight effervescence of the soil matrix.

The surface soil with Ah-AhB-Bw-C1-C2-C3-R horizons (Figure 2) represents a Folic Eutric Cambisol. The soil is formed on an upland slope with a gradient less than 5° under broadleaf forest dominated by Acer platanoides and Quercus robur and admixture of Tilia cordata and Ulmus laevis. Parent material consists of loamy sand or sandy loam deposits underlain by unaltered calcareous sandstone slab at a depth of 130 cm (horizon R). The upper part of the soil profile consists of a very dark brown (10 YR 2/2) Ah horizon with moderate granular structure and loam texture grading into the transitional mottled dark brown AhB horizon (Figure 2a).

The thickness of the Ah horizon varies between 7 and 12 cm (up to 16 cm in the surrounding soils). Below the AhB, there is a relatively thick (16–20 cm) Bw horizon with sandy clay texture situated above the parent material. Unlike the C horizon, the Bw horizon has a reddish color (5YR 4/4), is weakly structured and contains diffuse dark brown humus mottles. The reddish shade is thought to have formed due to weathering or transformation of primary minerals producing ferric oxide and hydroxide coatings. At the depth of 42–48 cm the C horizons begins, distinguishing three sub-horizons. The yellowish C1 and C2 sub-horizons are of sandy loam or loamy sand texture and contain weakly to moderately weathered fragments of sandstone (up to 10 cm in diameter), typically covered by a distinct layer of very dark to almost black material (Figure 2c), while more strongly weathered sandstone fragments (large or fine) appear as very dark mottles (Figure 2b). The dark color of the material implies the presence of organic compounds and/or manganese oxides. The lowermost residuum, or the C3 horizon, which lies above the consolidated calcareous sandstone plate, is similar in texture to the C1 and C2 sub-horizons and also contains small dark mottles, but of a reduced matrix characterized by greenish colors typical for redox depletion. Below, the surface of the unaltered calcareous sandstone slab in the R horizon displays continuous coatings (Figure 2d) consisting of dark material similar to that found in the residuum horizons.

The study of the soil chronosequence at the southern frontier of the forest belt in the Middle Volga region clearly showed the similarity of soils and landscapes through the time interval of the last 4000 years. The investigated soils display relatively poor soil development and the lack of distinct polygenetic features. The impact of the climatic changes on soil morphology and properties, which have been registered in soil chronosequences in the northern, central and southern parts of the forest-steppe zone of the Russian Plain, was smoothed by two factors: 1) the buffering effect of non-reactive parent material, inhibiting the development of certain pedogenic processes and 2) the similarity of vegetation cover during the studied time interval. On the basis of analytical, palynological and pytolithic data, it can be concluded that both soils developed under forest communities, were affected by minor variations in precipitation and temperature. The shift from more open forests to denser forests following an increase in humidity was detected in the microbiomorphic analysis. The pedo-signature of the drier (subhumid) period was preserved in the humus horizon of the buried soil, showing higher quality humus, more intensive bioturbation and a darker color. We suggest that this stage occurred in the Late Atlantic period, while the subsequent increase in moisture content took place in the Subboreal period prior to the burial of the soil, recorded in the soils’ middle horizons as weak illuvial clay features. 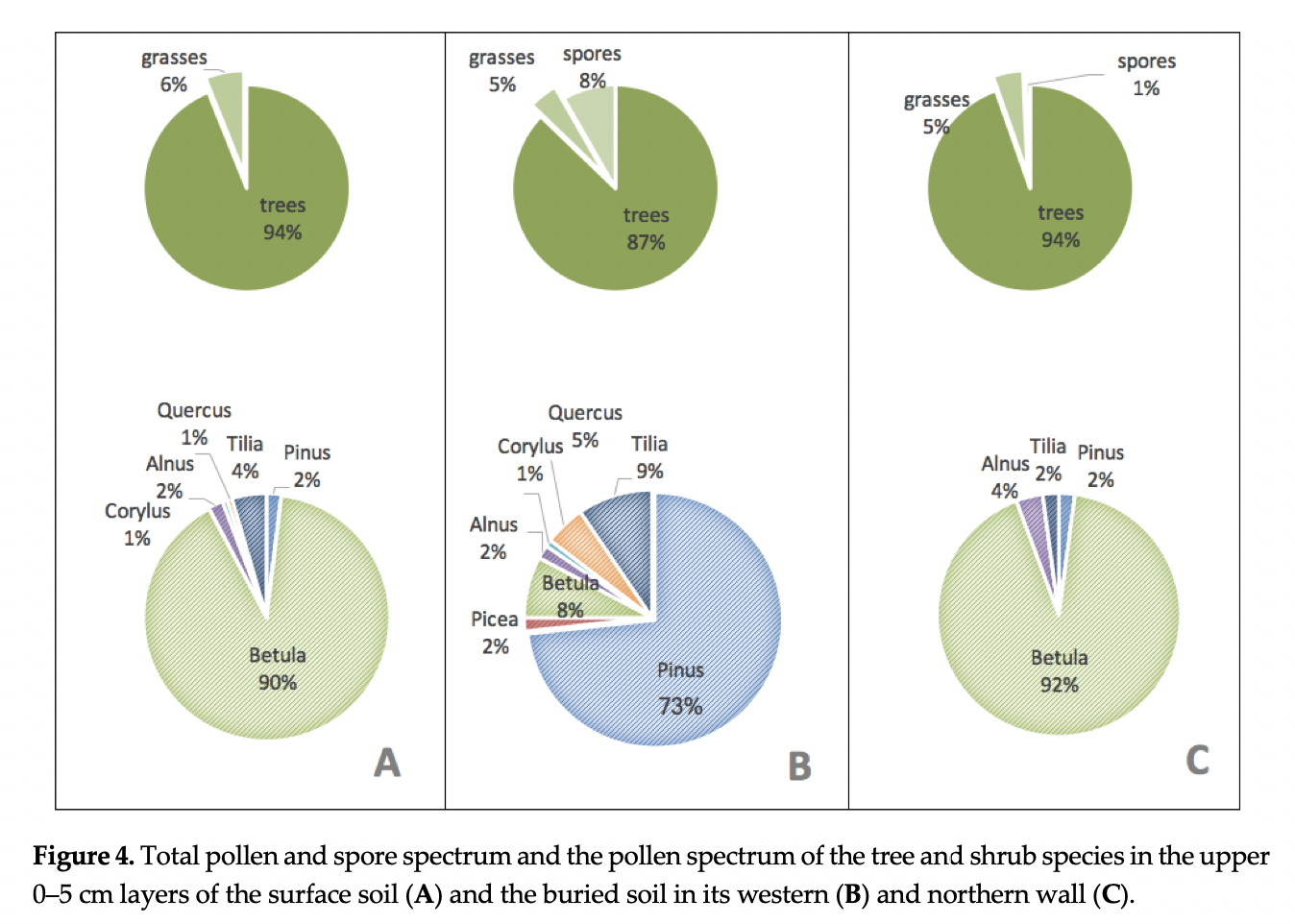 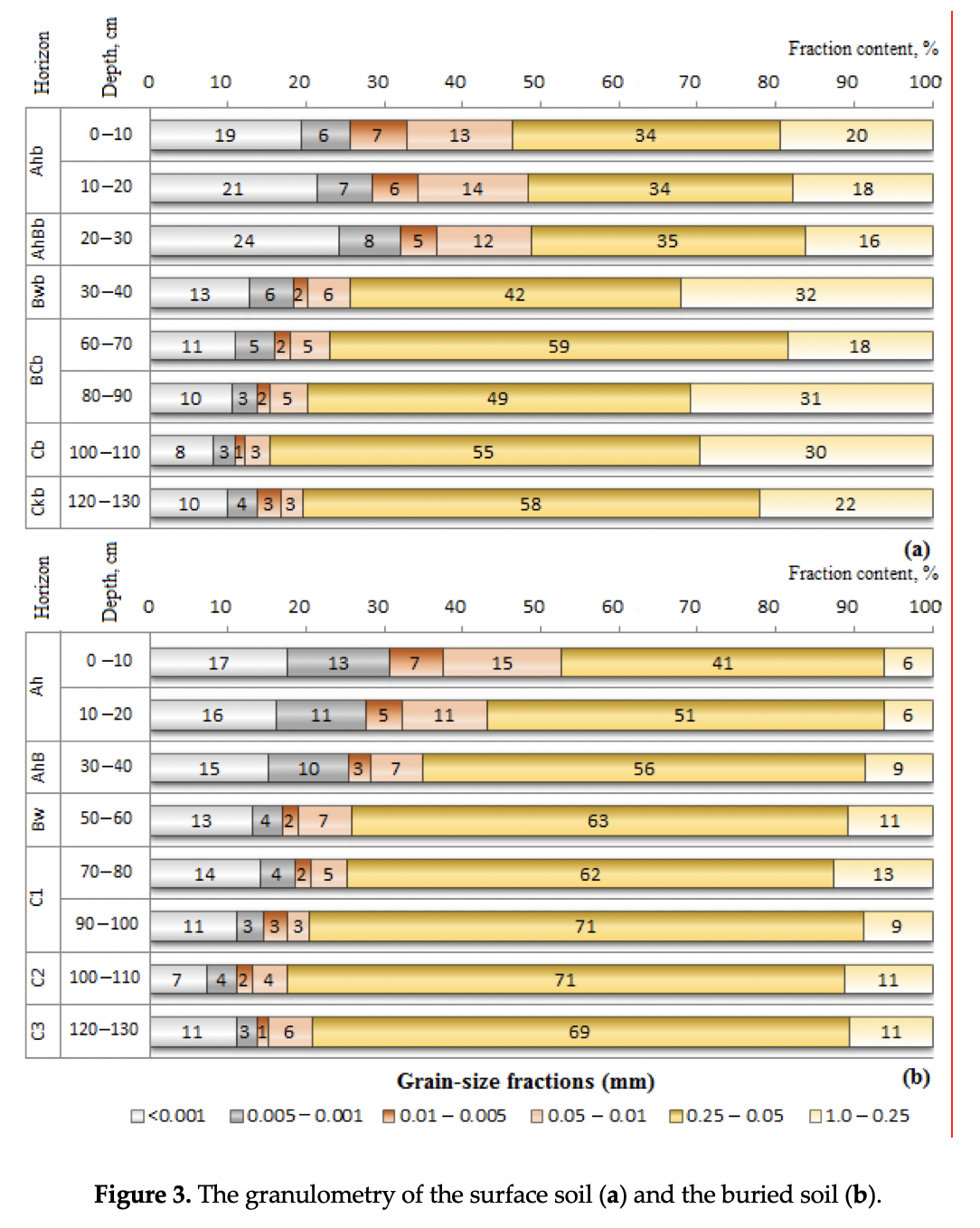