The Borisovka settlement is restricted to the southern ridges of the Central Russian Upland, with highly dissected uplands elevated at 200 m a.s.l. It occupies a narrow promontory formed by a junction of several gullies with steep slopes heading to the Vorskla River Valley. Elevation above the local erosion basis reaches 50 m (Fig 1b). The Neogene bedrock (mostly sandstones) is covered by a thick (up to 20 m) thick loess mantle (up to 20 m) that includes loess-paleosol sequences starting from Lower (MIS16) to Upper (MIS2) Pleistocene.

The climate of the Belgorod region is moderate. The mean annual temperature in the studied area is +6.3 °C. The mean annual precipitation is 610 mm, with a precipitation/evapotranspiration ratio of ~1.0–1.1. According to the soil-ecological zonation of Russia, the study area belongs to the southern part of the Middle-Russian province dominated by Chernozems and Grey Forest Soils (Chernozems and Luvic Phaeozems, IUSS working group WRB, 2015) developed under steppe ecosystems with patches of broad-leaved forests (Fig 1c). 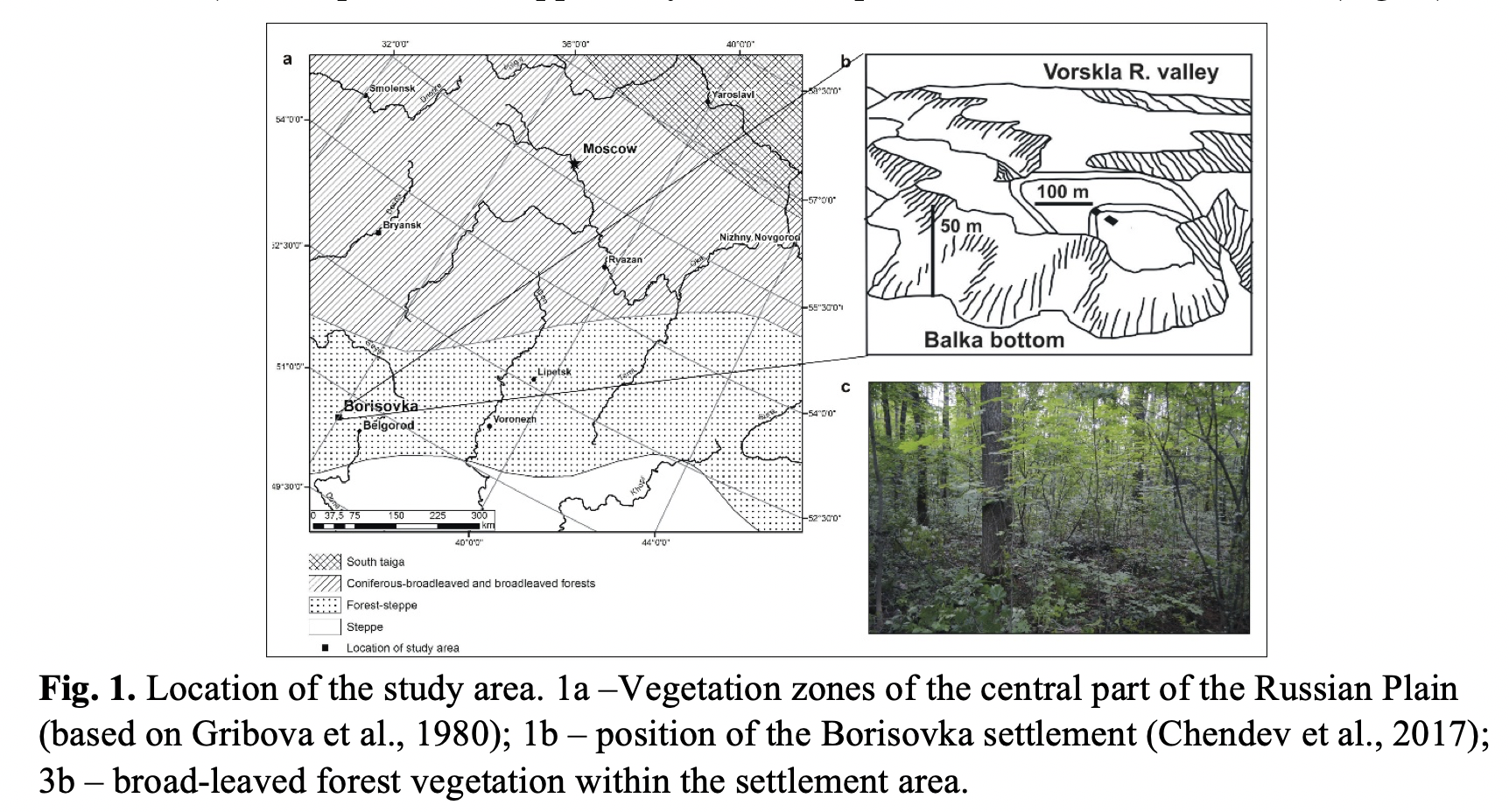 This settlement appeared in the Early Iron Age that correspond to Sub-Atlantic period of the Holocene. 14C of charcoal from the earth wall is 2450 ± 40 years BP (noncalibrated), and 2540±100 years cal. BP (CalCurve: IntCal_13 (Chendev et al., 2017). During the Early Iron age the area was a part of Scythian civilization with Iranian-speaking tribes occupying extensive belt in the Northern Black and Azov sea area in the Don and Danube river basins.

The buried soil - Luvic Chernozem (Loamic) was excavated 10 m apart from the surface soil. The soil is buried by the fortification earth wall with a preserved height of 1.5 m made of heterogeneous material – an arbitrary mixture of various soil horizons, with a big share of dark gray material at the bottom part of the earth wall (Fig. 2a). The material of the earth wall was repeatedly burnt during the construction and contains charcoal fragments.

The buried soil was examined on all three sides of the exposure showing a consistent thickness of soil horizons. The front wall of the soil pit comprises 2.0 m in depth. The soil profile has a well-developed dark Humic horizon Ahkb with an angular blocky and fine granular structure (Fig. 2a). The ped faces are covered by thin carbonate coatings and rhizoliths (Fig. 2b). The ABthkb1 and ABthkb2 horizons are characterized by a strongly fine and medium prismatic and a very fine to medium angular blocky structure and thin manganese, thin clay and silt coatings (Fig. 2c, d, e, f). Carbonates in the ABthkb1 horizon are represented by pseudomycelia (Fig. 2c) and soft powdery lime (the ABthkb2 horizon). The Btkb horizon has an angular blocky structure; carbonates are presented by soft powdery lime.

Like in surface profile, the buried soil (the 2Ahkb and 2AhBkb horizons) is distinguished at a depth of 80 cm by a slightly darker color and fine granular structure with well-developed carbonate coatings. Abundant secondary carbonates form coatings on pedfaces, hard and soft nodules and pseudomycelia (Fig. 2e, f). Dark krotovinas are present at a depth of 52–58 cm and in the lowermost part of the profile (180-200 cm, Fig. 2a). 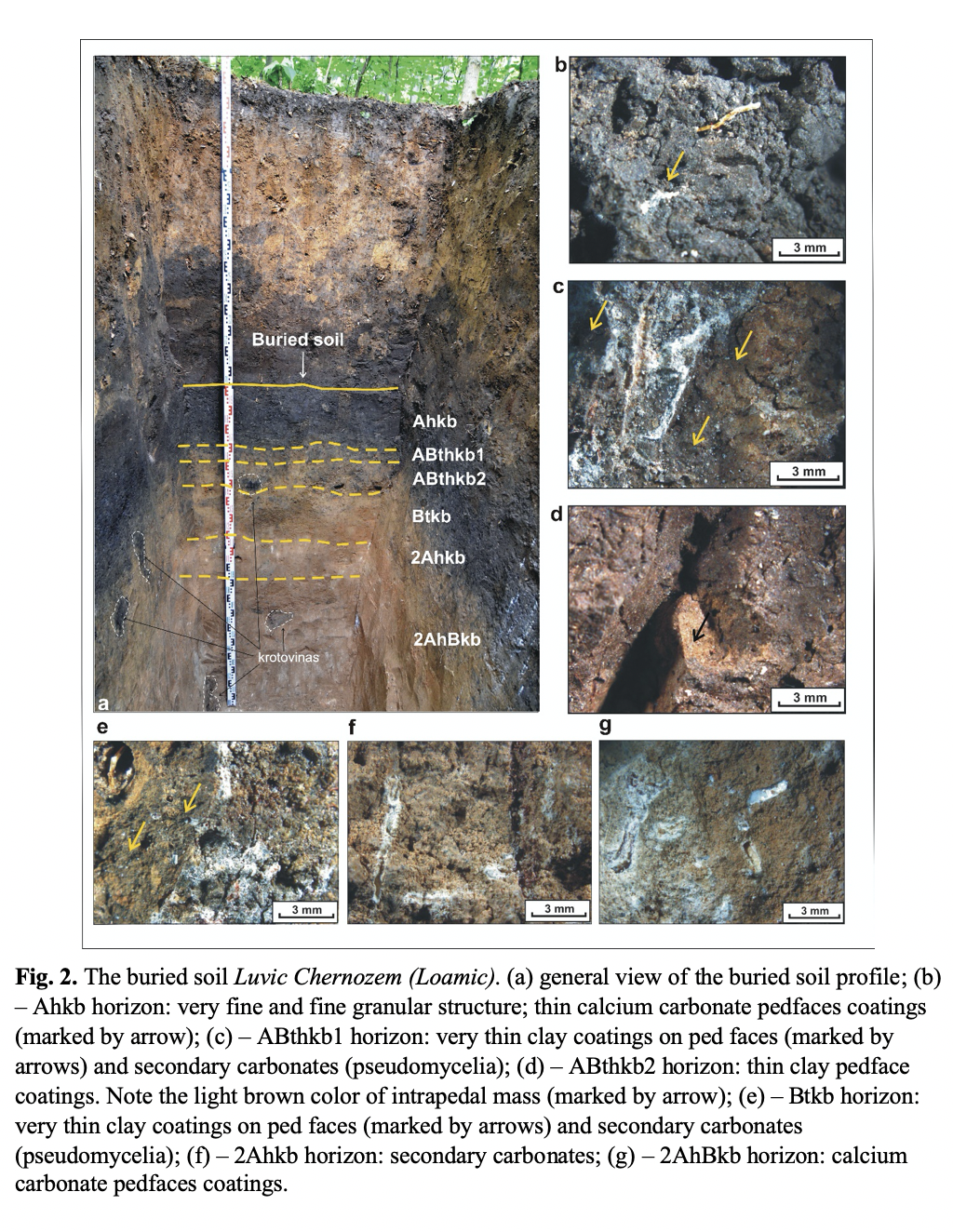 Surface soil - Chernic Greyzemic Luvic Phaeozem (Loamic) is formed in loamy loess, underlain by carbonate loess at a depth of 100 cm (Fig. 3a). The soil profile has three well-developed dark Humic horizons with a total thickness of 40 cm (Fig. 3a). These horizons are enriched with uncovered sand and silt grains in the groundmass of the lower part (Greyzemic features, Fig. 3b). Humic horizons are merging to the BtAh horizon with a strong fine and medium angular, blocky structure (Fig. 3a). Humus and clay-humus cutans (Fig. 3c, d) and very thin whitish silt coatings above them cover the ped faces (Fig. 3d). The intrapedal mass in this horizon is characterized by dark brown color (Fig. 3c).

A sequence of Argic horizons is characterized by angular to sub-angular blocky peds covered by thick clay and clay-humus cutans on the horizontal and vertical sides (Fig. 3e, f). Silt coating overlies clay cutans on the vertical faces.

Argic horizons underlain by buried soil that is exposed at a depth of 100 cm in a layer of carbonate loess. The horizons of the buried soil (2Ahkb and 2AhBkb) are recognized by slightly darker color, weak, prismatic structure combined with fine granular aggregates, abundant rhizoliths of grasses and carbonate neoformations (coatings, soft powderly lime, nodules) (Fig. 3a, g). A strong reaction with HCl suggests the presence of high amounts of carbonates starting from the top of the 2Ahkb horizon. Dark krotovinas (5-7 cm in diameter) are abundant within 120–180 cm (Fig. 3a). 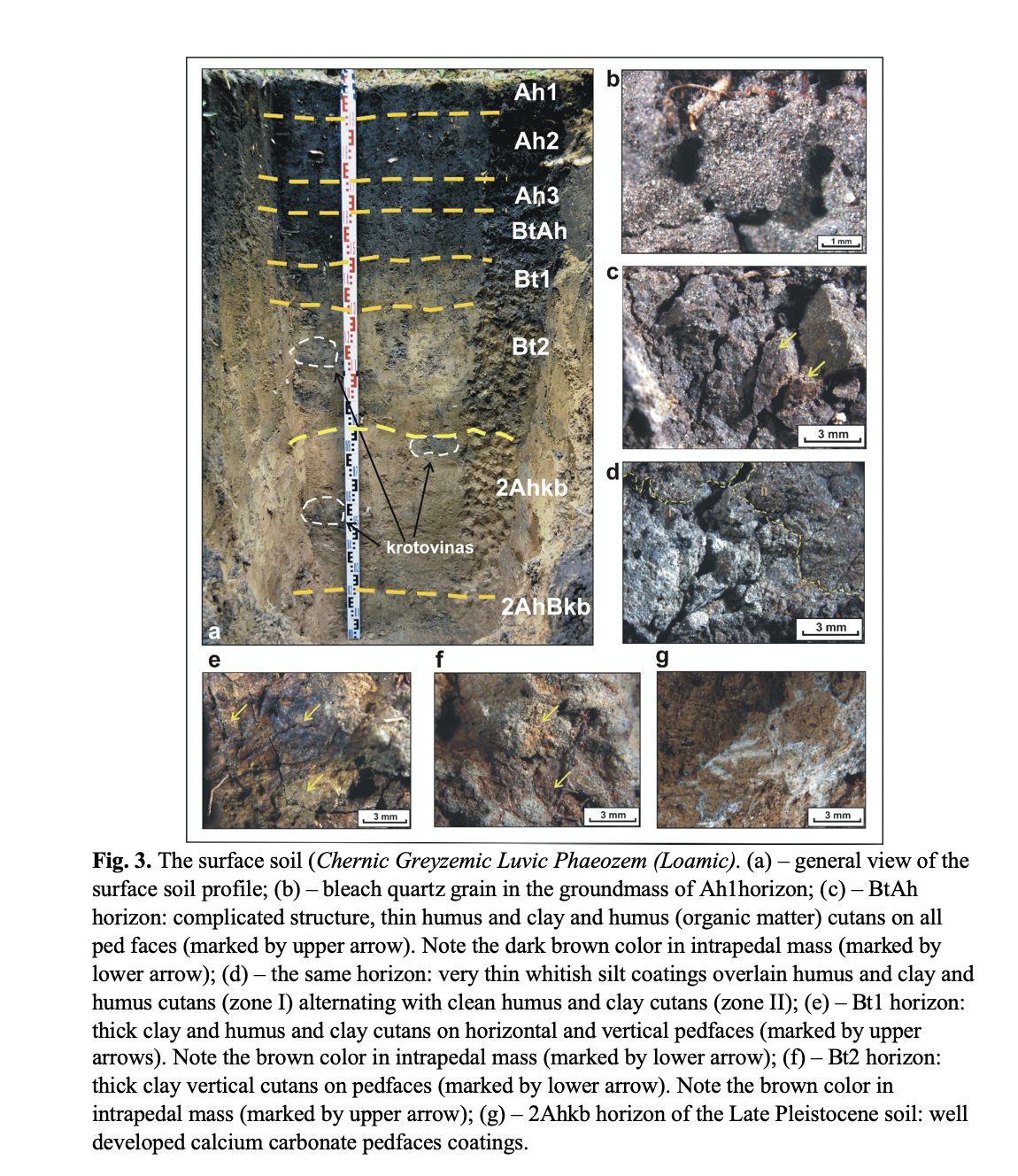 The study of soil chronosequence confirmed that steppe and forest steppe areas of the East European Plain in the second half of the Holocene were influenced by rhythmic climate variations with alternating colder and warmer, more arid and more humid stages. Landscape evolution for this period has not yet been fully studied in the southern forest-steppe area on the close border of the steppe zone. The Borisovka settlement allows studying environmental trends at the southern fringe of the forest-steppe zone since the Early Iron Age (2500 years BP) till present by comparing soils buried under fortification walls and surface soils.

Both soils of the studied chronosequence were formed on the same upland surface with similar topography in a short distance from each other and represent similar pedosedimentary sequence formed in the upper and middle loess layers underlain by the lower carbonate loess. The surface soil is Chernic Greyzemic Luvic Phaeozem (Loamic). The buried soil is Luvic Chernozem (Loamic). The upper horizons of the buried soil were truncated during construction of the earth wall and the soil was subsequently transformed by diagenesis. The latter includes enrichment with secondary carbonates leading to increases in pH values within the whole profile, as well as increases in CO2 and CaO bulk chemical content, and compaction the upper layers resulting from overlying mass of the earth wall. Taking into account truncation and diagenetic changes it was possible to reconstruct the soil buried during the Early Iron Age. It was presented by (Chernic) Luvic Phaeozem Loamic.

Soils of the chronosequence are polygenetic combining the features of both forest and steppe pedogenesis. Humid (forest?) pedogenetic stage resulted in the Luvic features. The subsequent steppe pedogenesis is evidenced by the thick Mollic (Chernic?) horizon and krotovinas. Radiocarbon dating allow to brackets the steppe stage to the mid-Holocene Atlantic period (6750±120 years CalBP). The subsequent pedogenetic stage after the Early Iron Age was influenced by pedogenesis in the broadleaf forest environment. It resulted in the transformation of the upper part of the Humic horizon, further clay translocation and development of Greyzemic features in the upper part of the Argic horizon. Modern clay illuviation is evident by thin hypo-coatings. This paleopedological reconstruction is in line with other palaeoclimatic proxies like phytoliths and microbial genes. It was shown that the analysis of total microbial DNA, is a promising method for studying the soil chronosequences.