The area belongs to the northern part of the Volga upland and is located within the Chuvash plateau on the left bank of the Sura River. It is a highly dissected hilly terrain at an elevation of 180 – 200 m asl, composed of the Upper Permian sedimentary rock (sandstone, limestone and dolomite) and Quaternary deposits. Deep ravines form a dense network close to river valleys and cut uplands to a depth of 60 – 100 m. Quaternary sediments have a thickness of 18-20 m and form the uppermost section of the sedimentary cover. A 5-10 m thick mantle of loess sediments covers the area around the key site. Vegetation consists of broadleaf forest with an admixture of oak that is typical for the southern part of the East European forest zone. According to soil-geographical zoning, the study area belongs to the Oka-Sura province of Grey Forest Soils (Phaeozems, IUSS Working Group WRB, 2015) formed in loess. However, soil pattern is very complex, characterized by Phaeozems, Chernozems and Retisols depending mostly on parent rock.

The climate of the study area is temperate continental with a mean July temperature 18.6˚C and a mean January temperature of -13.0˚C. The annual sum of temperatures above 10 ˚C equals 1900–2000 ˚C. The duration of frostless period only slightly more than 3 months. The soil is usually frozen to a depth of 75 cm in the second half of the winter; during extremely cold winters the depth of freezing reaches 140-150 cm. Mean annual precipitation is 510-550 mm with 70% falling during summer months. Mean annual precipitation/evaporation ratio is about 1.3 - 1.4.

The key site is situated on the high upland slope to the Sura River within a patch of broadleaf forest in the upstream of several gullies. The fortified settlement Nozha-Var with an area of 100x30 meters is located on a narrow promontory in a junction of two deep ravines with steep slopes that lead to the valley of the Sura River 2.5 km south-east from Yadrin town (Fig. 1). The surface of the promontory is elevated over the bottom of the ravine by 20 m. Steep slopes (up to 40˚) may have been cut artificially by ancient people to strengthen the defensive role of the earth fortification walls. According to the State Soil Map 1:1000000, N-38, soils in the area of the Nozha-Var settlement are sod-podzolic soils (Shishov et al., 2004), or Retisols (IUSS Working Group WRB, 2015).

Archaeologists first discovered the Nozha-Var settlement in 1927. Like many other ancient settlements, the Nozha-Var was located on a high steep-sided promontory (Fig.1a). In 1956, the total area (100х30 m) of the settlement including two defensive walls was excavated. It was found that the settlement was used by various cultures starting from the Bronze Age (in the second half of the third – beginning of the second millennium BC, the Balanov culture) to the Early Iron Age (the Gorodets culture). The cultural layer of the Bronze Age with numerous ornamental ceramics is well preserved under the fortification earth walls. The cultural layer of the Early Iron Age is present mostly within the settlement and is related to wooden constructions. The well preserved northern wall was constructed between the 2nd-4th century AD.

The studied paleosol was buried beneath a rampart with a preserved height of 2.5 m on the outer fortified perimeter of the settlement Fig. 1a.

The site is occupied by broadleaf forest (Fig. 1b) with dominance of Querqus robur, Tilia cordata, Populus tremola and admixture of Betula pendula. The rampart is made of heterogeneous material (an arbitrary mixture of various soil horizons, Fig. 1с) The earth was repeatedly burnt during construction nearly to the state of brick to increase the resistivity of the bank. Several ochre-brown impermeable interlayers enriched with charcoal indicate stages of construction. The soil formed on the fortification wall (Folic Umbrisol) has no Albic or Argic horizons – the material below 20 cm fully retains heterogeneity. The surface of the buried soil is slightly (2-3˚) inclined towards the edge of the ravine slope. The excavation exhibited the buried soil in all sides of the pit with the same thickness of soil horizons. This ensures that despite the proximity to the ravine slope the buried soil is not truncated. The front wall of the soil pit is 1.7 m deep, while the side walls exceed 2 m. The face of the buried soil profile was destroyed in the upper right corner by an archaeological excavation in 1956 (Fig. 1c, 2a).The boundary between the buried soil and the earth mound is marked clearly by a 2-5 cm thick layer containing charcoal and ash formed on the old land surface as a result of wood combustion before the construction of the mound (Fig. 2b). Scattered pieces of ceramics also occur on the former surface. Radiocarbon dating of charcoal in the lower part of the nothern fortification mound confirm the age of the construction and indicate the time of the soil burial – 1850 ±210 years cal. BP. 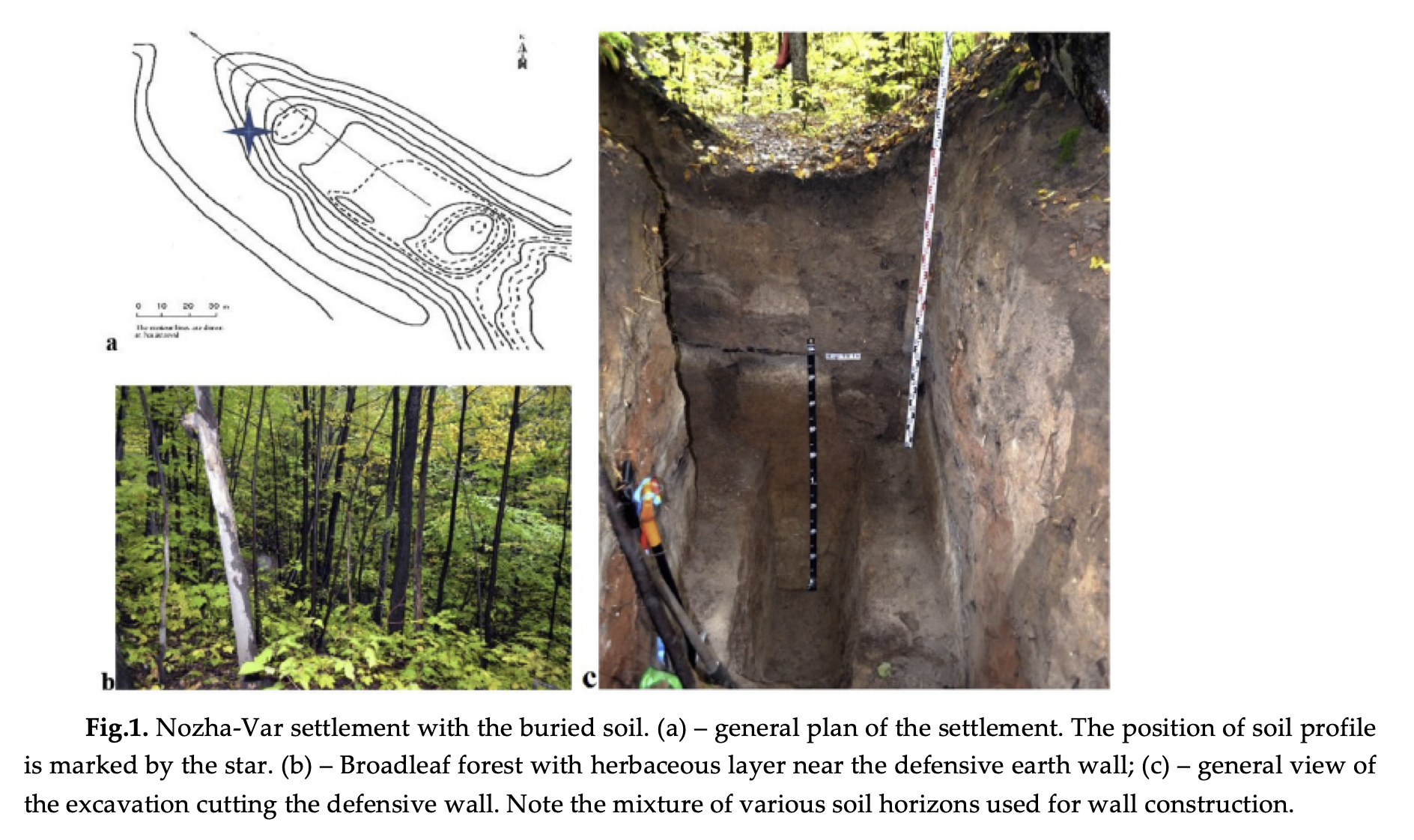 The buried soil, a Glossic, Folic, Albic, Dystric Retisol (Abruptic, Loamic, Cutanic, Differentic, Ochric) has a profile similar to the surface soil and formed in the same parent material – mantle loam underlain by calcareous loess at a depth of 120 cm. The soil profile has well developed Ah horizon, similar to that of the surface soil, though it is more compact (Fig. 2a, c). The Albic horizon is also similar in thickness and color (Table 1). The boundary between Albic and Argic horizons is abrupt but the retic properties are weakly expressed (Fig. 2a, d). The Argic horizons are similar: both Bt1b and Bt2b horizons have strong subangular blocky structure changing from fine to coarse downward (Fig. 2e). The structural units in the Argic horizons are covered by multi-layered clay cutans and uncoated silt and sand grains (skeletans) though they are also less abundant. The Fe-Mn concretions are common at the contact of the Albic and Argic horizons and rare in the horizons below. All upper horizons show effervescence because of carbonates that have been leached from the earth wall. The boundary between the mantle loam and the calcareous loess (the 2Ahkb horizon) is abrupt (Fig. 2a). Loess material is characterized by high porosity. Like in the surface soil, the carbonates impregnate the matrix and form pseudomycelium, soft concentrations and hard nodules. The abundance of rhizoliths and fine granular structure indicate the former surface horizon of the pre-Holocene paleosol (Fig. 2f). The measurements of the thickness of the upper horizons made on three walls of the buried soil pit in 10-15 cm intervals gave the following values: for the Ahkb horizon, the spread of thicknesses was 3 – 6 cm about the mean value 4.5 cm (34 measurements). For the Ekb horizon, the spread of thicknesses was 7 – 14 cm about the mean value 9.8 cm (29 measurements). 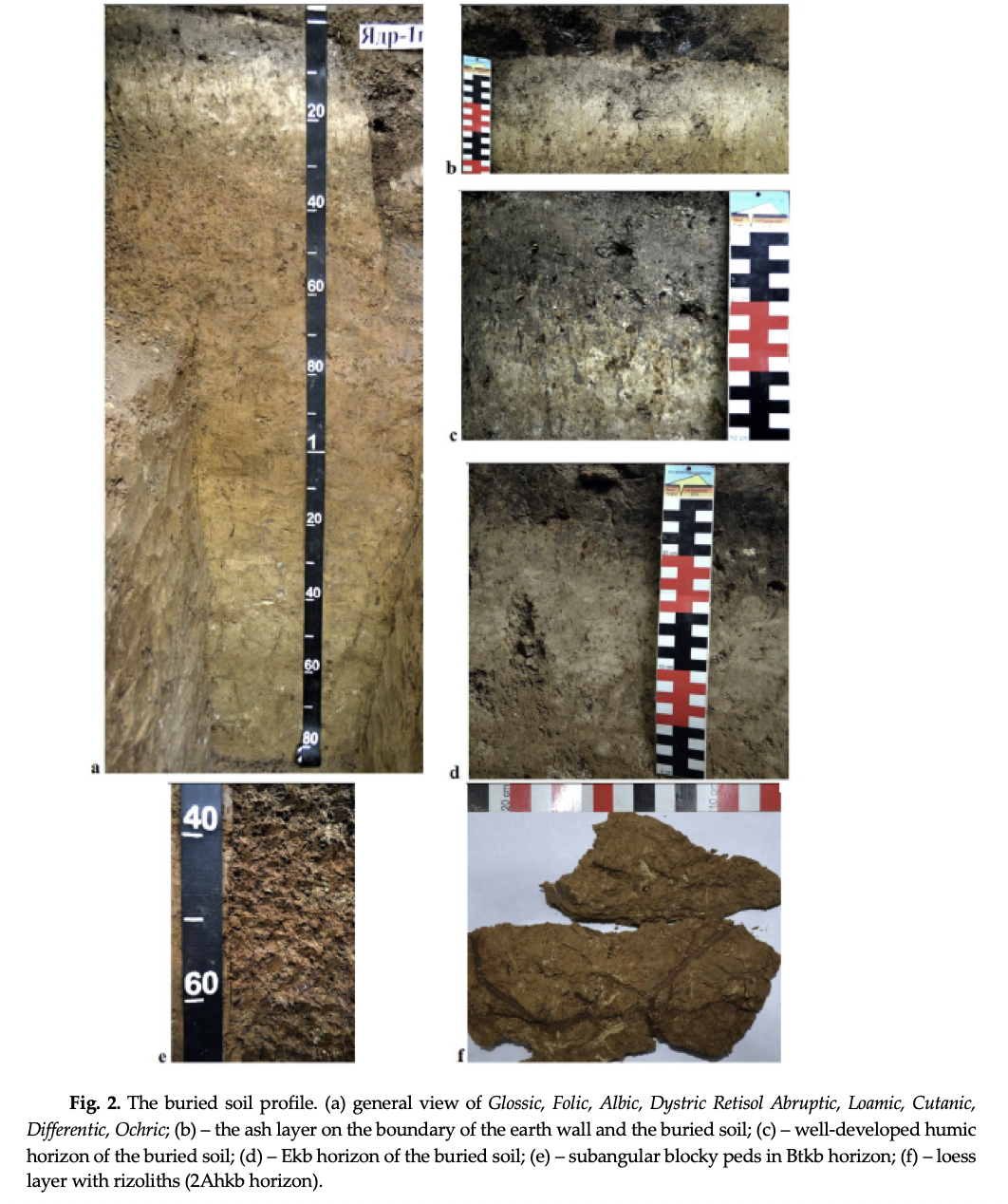 The surface soil has formed on an extended part of the promontory 190 m inland and 1-5 m from the edge of the ravine side. The site is occupied by same type of broadleaf forest as it was found near the defencsive wall (Fig. 1b) with dominance of Querqus robur, Tilia cordata, Populus tremola and admixture of Betula pendula. Shrubs are represented by Euonymus verrucosus, and the herbaceous cover includes Carex pilosa, Ásarum europaéum, Aegopódium podagrária and Viola nemoralis. The surface soil, a Glossic, Folic, Albic, Dystric Retisol (Abruptic, Loamic, Cutanic, Differentic, Humic) has formed in mantle loam that is regarded as a northern variety of loess with characteristic features of loess sediments: uniform bedding on watersheds and slopes, vertical walls in exposures, and predominance of the coarse silt fraction in granulometric composition. The mantle loam is underlain by calcareous loess at a depth of 120 cm (Fig. 3a). The soil profile has well developed dark Ah horizon (Fig. 3b). It is merging to the transitional AE and pinkish-gray Albic horizon (Fig. 3c). The latter is lighter in color in the lower part, above the boundary to the Argic horizon. The boundary between the Albic and Argic horizons is abrupt and displays well expressed retic properties with albeluvic glossae (Fig. 3d). The Argic horizons have strong subangular blocky structure changing from fine to coarse downward (Fig. 3e, f). Structural units are covered by dark multi-layered clay cutans and abundant uncoated silt and sand grains (skeletans) on top. In the Bt2 horizon, the blocky structure forms sub-units of prismatic units. There are redox features that are typical for soils of the forest zone – Fe-Mn concretions are common at the contact of the Albic and Argic horizons and rare in the horizons below. The boundary between the mantle loam (BCt horizon) and the layer of calcareous loess (2Ahkb horizon) is abrupt. Slight effervescence starts from the top of the 2Ahkb horizon though strong effervescence accompanied by an assemblage of carbonate neoformations appears first in separate patches. Carbonates impregnate the soil matrix and form pseudomycelium, soft concentrations and hard nodules. The buried soil of presumably pre-Holocene age is detected by slightly darker color, fine granular structure and high porosity of its 2Ahb horizon. 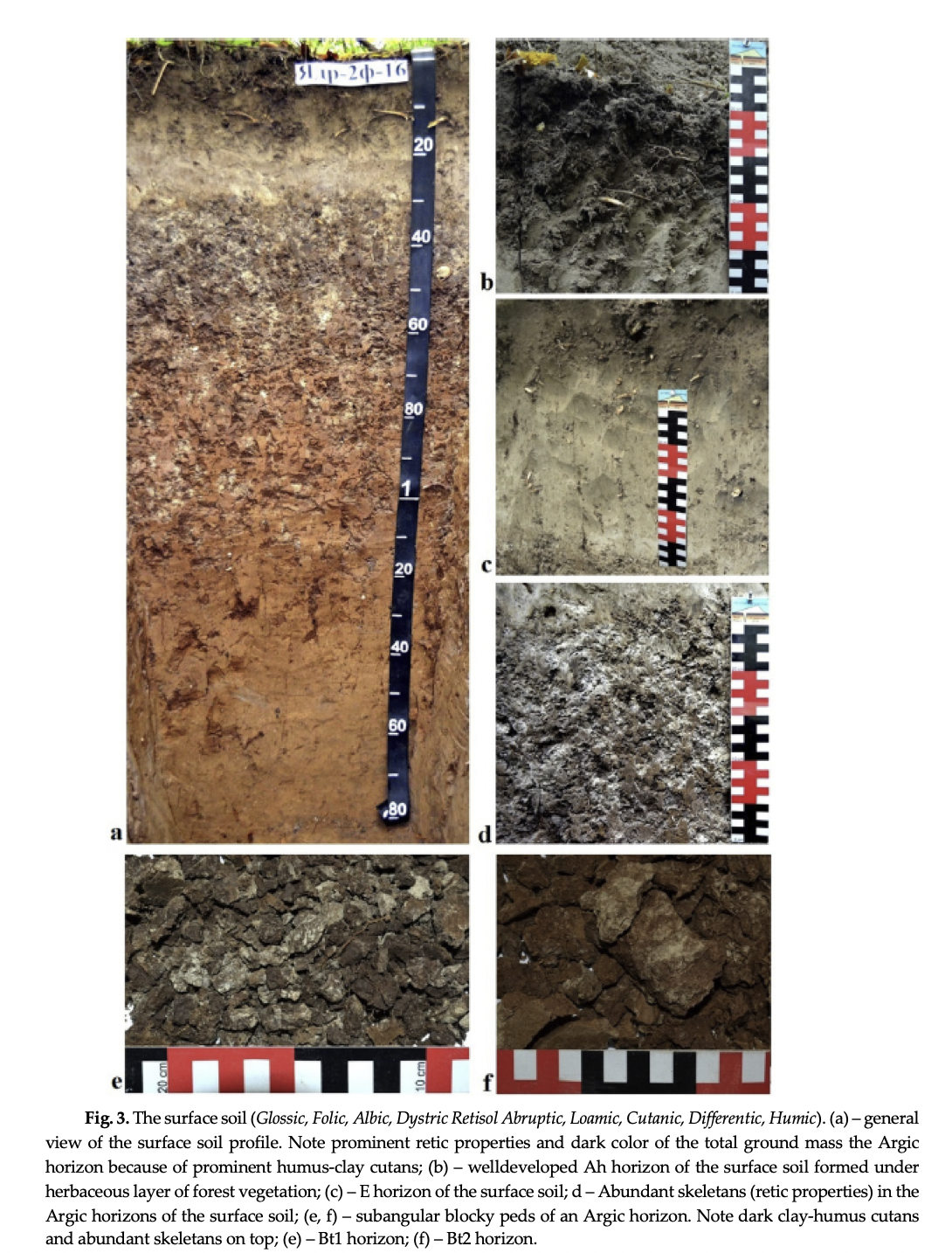 Various studies of soils buried under burial mounds and fortification walls showed that steppe and forest steppe areas of the Russian Plain in the second half of the Holocene were influenced by considerable climatic variations with alternating colder and warmer, more arid and more humid phases. The Nozha-Var settlement allows for studying environmental trends at the southern fringe of the forest zone since the Early Iron Age until now by comparing soils buried under fortification walls and surface soils. Both soils investigated in this study were formed on similar surfaces with uniform lithology (mantle loam underlain by calcareous loess), at the same elevation and in close proximity to each other. These allow for relating the possible differences in soils to either environmental changes or duration of pedogenesis. Despite the complex soil pattern in the study area (Chernozem, Phaeozems and Retisols in close proximity to the key site) the buried and surface Retisols do not differ considerably in terms of morphological and analytical characteristics. The studied Retisols indicate landscape stability at the southern boundary of the forest zone that is in line with other palaeoclimatic proxies (pollen, phytoliths, and microbial genes). Pedogenetic evolution since the Early Iron Age led to better expressed retic properties and slightly deeper leaching of carbonates of the surface soils compared to the soil that was buried during the Early Iron Age.

The differences between the surface and buried soils include evidence of anthropogenic impact in the buried soil and diagenetic transformation. Diagenesis in the buried soil includes compaction of ground mass and accumulation of carbonates in the upper horizons, decrease in organic matter content with selective relative accumulation of humic acids, transformation of the structure of soil microbial community. Both content and taxonomic composition of soil microbial communities are considered promising palaeoclimatic proxies as well as a record of diagenetic changes in buried soils. 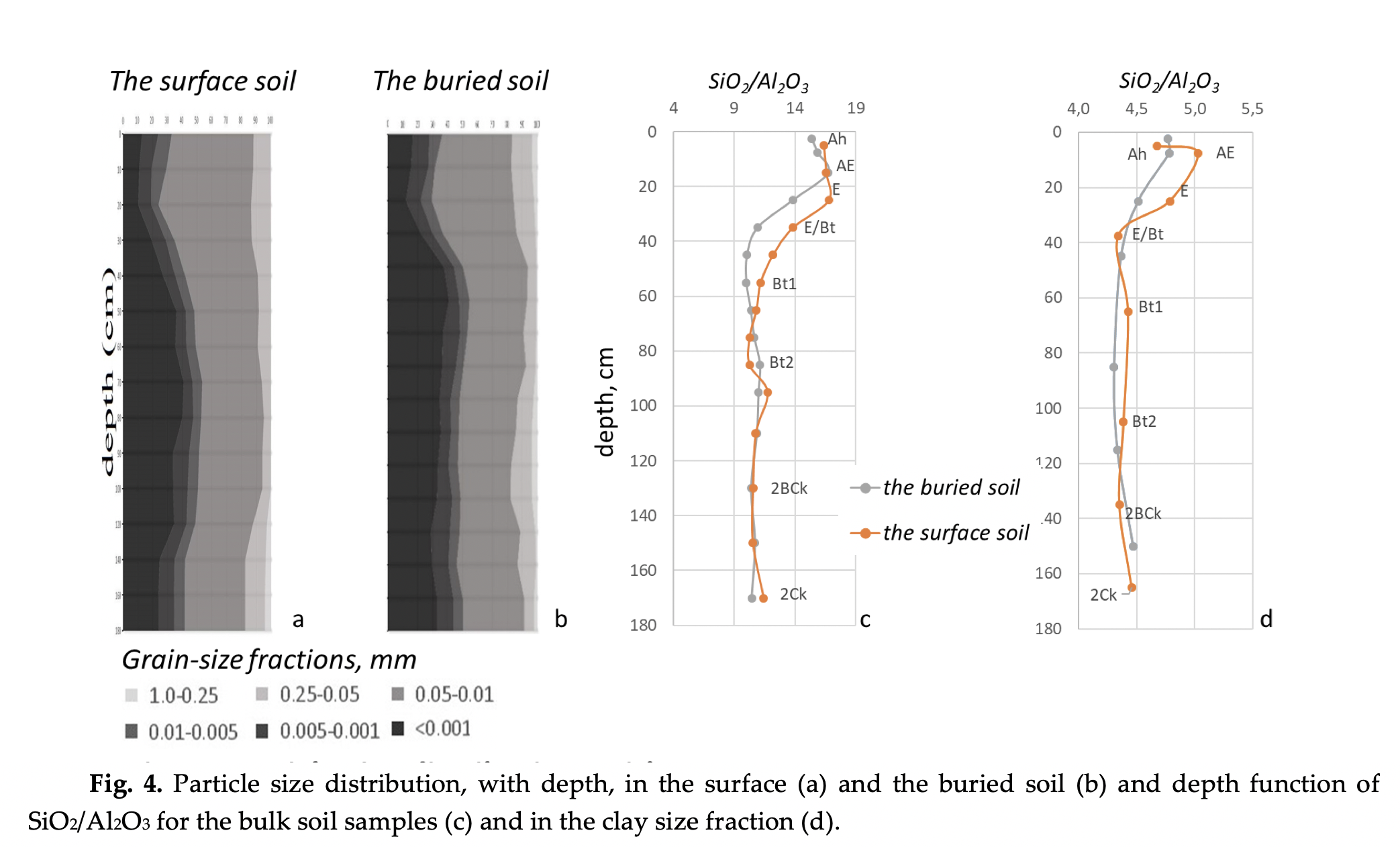